Ever thought you’re too old to start again and follow your dreams? Read why I decided to do just that and become a 30-year-old intern…

The day I quit Bloomberg in March 2012, I expected my managers to be mad at me. I was abandoning the company to which I’d devoted most of my 20s, and I was leaving my colleagues in the lurch.

Instead, the wise bureau chief gave me a hug and said “You’ll never regret leaving any job. Every time you leave a company or make a big change, things always work out for the best.”

Fourteen months on, I can honestly say he was absolutely right. Things did work out for the best. Just not exactly in the way we both imagined.

It turned out the decision to quit Bloomberg and leave Argentina was the decision that saved my life. The move to Ireland prompted me to return to the doctors for a second medical opinion, and the rest is history.

So, when a colleague at Facebook said the exact same thing when I told him I was leaving today, I couldn’t help but smile. Everything happens for a reason.

Some people have found it hard to see why I’ve been – for the most part – a happier person since cancer came into my life, and it’s always been a little hard to explain. Now, here goes:

When I was about six years old, I knew exactly what I was going to be when I grew up. I was going to be the editor of a magazine. From the day I learned to write, I was scribbling down stories, typing away furiously in MS-DOS and making my own magazines with cut-out pictures and Pritt Stick. Over the years, I broadened my interests and grew to love a lot of things, from acting to languages to teaching to sport. But one thing always remained constant: my passion for writing.

Somehow, though, my career took a different path. I took a languages degree, travelled the world, became a financial journalist. Seven years into my career, I left Bloomberg – partly for personal reasons, partly because I had lost track of my goals and wasn’t passionate enough about finance. I moved into a job at Facebook, continuing with my love of languages and Latin America, but it wasn’t right. 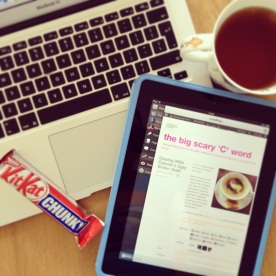 Apart from my Mum and Dad, to whom I owe everything, writing was the thing that got me through the last 11 months of hell. My blog was what connected me with my friends, family and colleagues past and present when I was too sick to keep in touch with them in person. My blog was the thing that put me in touch with a whole new set of friends – a group of girls all over the world with whom I have cancer in common but who are by no means defined by their cancer.

But there comes a time when the Cancer part stops and the Life part starts again. I will continue this blog because there is still plenty to say and people who are benefiting from it, but I will be writing more and more about other things and the cancer part will take a back seat. It’s a shame when it takes a major illness to push you to follow your dreams, but if there’s anything I’ve learned over the last year, it’s that life is way too short.

Tomorrow is my last day at Facebook and after that I plan to take a few months to properly rest and reflect on the crazy year I just had.

In September, I’ll be moving back to London to start the MA Magazine Journalism at City University – a course I’ve wanted to do for about a decade but never got the chance because life was too busy passing me by. I may be the oldest student in the class, probably doing my knitting in the back row and drinking cups of tea while the rest of the class go out drinking, but that’s ok. I’m doing it for me.

I will be forever grateful for the amazing times I had working at both Facebook and Bloomberg – two brilliant companies that taught me so much. From the lifelong friends I made at Bloomberg, to the people at Facebook who supported me through the hardest time of my life over the past year. I’m so lucky to have worked with so many talented, inspiring people at both companies and I don’t regret a single moment of my career so far.

When I was on sick leave, a colleague wrote a career testimonial in which the main message was “Find what you love”. A couple of weeks before me, she took heed of her own advice and jumped bravely into an unknown world of book-writing and doing what she loves. She didn’t even need cancer to spur her on.

When I announced my resignation from Facebook a couple of weeks ago, a big smile spread across my manager’s face. While there is the smallest possibility that he was just pleased to get rid of me, I’m pretty sure the smile indicated he was happy because he knew I’d found what I loved.